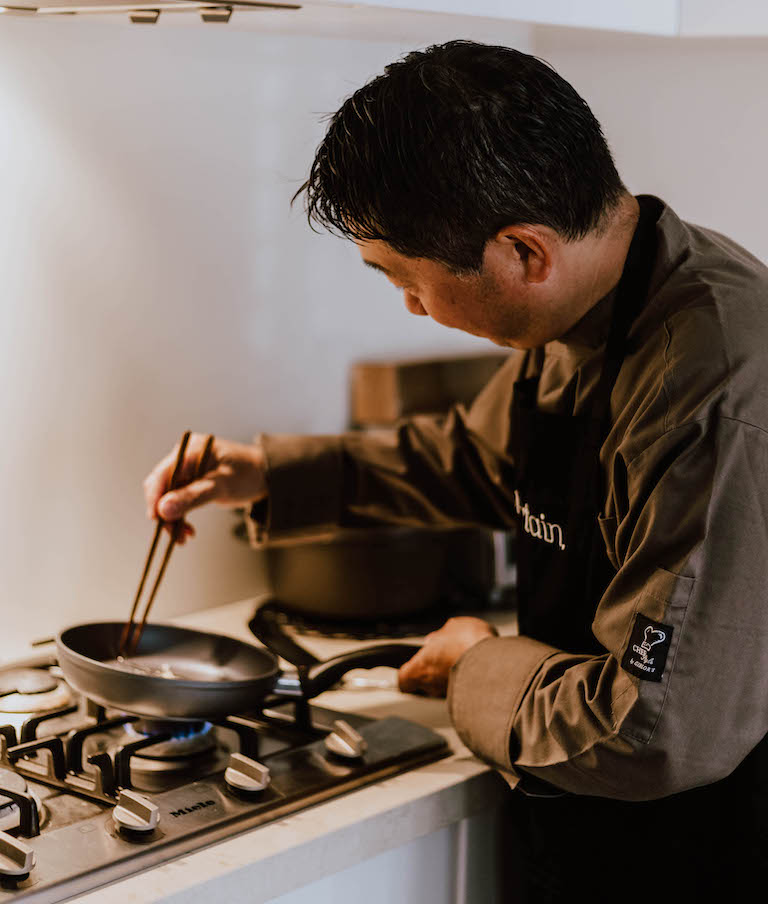 Chef Naofumi is passionate about experimenting with high quality Japanese and Italian cuisine, creating both modern and fusion menus.

Starting his career in Germany in 1995, he has a wealth of global experience from working in well-known restaurants and five-star hotels in New Zealand and Italy, introducing Italian Japanese gastronomy through his restaurant for six years in Tokyo. He has even worked for the Prada team competing in America's Cup Challenge in New Zealand and the Mazda Team competing in the Le Mans 24 Hours.

The past nine years he has been catering private events large and small for corporates and as a private Chef to families in both Australia and Japan.

Chef Naofumi once again cooked a beautiful banquet style meal enjoyed by all. The service was outstanding from catering for different dietary requirements, to the choice and variety of the menu, presentation and cleaning up, all with a smile. Thank-you

Chef Naofumi was very attentive, engaging and delivered beyond our expectations. We enjoyed our 3-course meal and thoroughly enjoyed listening to his journey with food. He left the place cleaner than before and our guests were blown away. Thank you chef!

Chef Naofumi was excellent, he explained each dish, was entertaining and his food was spectacular. We're already planning our next dinner party!

Chef Naofumi was fantastic and the food was delicious. He made our dinner party very enjoyable. I would highly recommend him.

Chef Naofumi was fantastic and so passionate about delivering awesome customer experience. The food was great and he interacted well with the guests. he left the kitchen sparkling making the night an overall success as I could relax and spent time with our guests. Thank you Chef Naofumi

Naofumi was the consummate professional, making the effort to really understand what cuisine we were looking for, working like lightning in the kitchen and leaving the place cleaner than it was to begin with. Would not hesitate to recommend Naofumi and the rest of the Intertain experience.

Chef Naofumi was a wonderful choice for our dinner. He was friendly and engaging, served delightful food and was very tidy in the kitchen. I highly recommend him.

The chef was really nice he explained every course which we found most interesting and delivered the food to our table in a friendly courteous manner. I can’t really fault the service and we are already thinking about an Italian night.

The night was FABULOUS. Chef Naofumi and the staff were perfect, couldn't have been more professional.

Chef Naofumi was an absolute delight. He was very polite, happy, fun and most of all, an amazing chef.

Chef Naofumi was delightful, his food was amazing and he created a beautiful atmosphere with no fuss or hassle!

Everyone thoroughly enjoyed the dishes, Chef Naofumi was very friendly and did a great job. The pear dessert was the highlight for me whilst my husband couldn't speak highly enough of the main meal. Overall a wonderful experience.

Chef Naofumi did a fantastic job! The food was amazing and he created a great atmosphere and story around the different dishes! He even brought >200 years old Japanese plates to serve a traditional Japanese Entree. Very well done and would always recommend him!

Chef Naofumi arrived on time and prepared impeccable, delicious food. He was friendly and polite and impressed all our guests with his flair and amazing Italian cuisine. I would highly recommend Chef Naofumi for his outstanding dishes and attention to detail.

Chef Naofumi was absolutely amazing and provided a great personal chef dining experience. He was very knowledgeable and passionate about his work which definitely showed in his food, which was amazing.

Taste the unique flavours of this Italian-Japanese fusion menu crafted by Chef Naofumi. The listed price is based on 6-9 guests served 3 courses for $100pp.

$120 per person including GST

Experience the seasonal flavours of this Italian-Japanese fusion menu crafted by Chef Naofumi. The listed price is based on 6-9 guests served 3 courses for $120pp.

Enjoy this modern Japanese menu curated by Chef Naofumi. Listed price is based on a minimum of 6 guests served 3 courses.

Chef Naofumi's modern Italian menu is influenced by his experiences living and working throughout Italy. Listed price is based on a minimum of 6 guests served 3 courses.

$280 per person including GST

Experience the fusion of Italian and Japanese cuisine with this fine dining Degustation menu crafted by Chef Naofumi. The listed menu price of $280pp is based on a minimum of 6 guests.

Chef Naofumi will work with you to create the perfect menu to meet your dietary and budget preferences for your occasion. Price will be determined after the first consultation.